Other bids were going on for different pairs, and were currently in the price range of a couple thousand each.

The rest of the collection will be sold in stores this Saturday and will retail at $245.

The Air Yeezy 2 is the second installment (and a slimmer version) of the 2009 Air Yeezy. According to Nike’s website, the design was inspired by classic 1980s basketball shoes and can be purchased in either black/solar red or platinum. 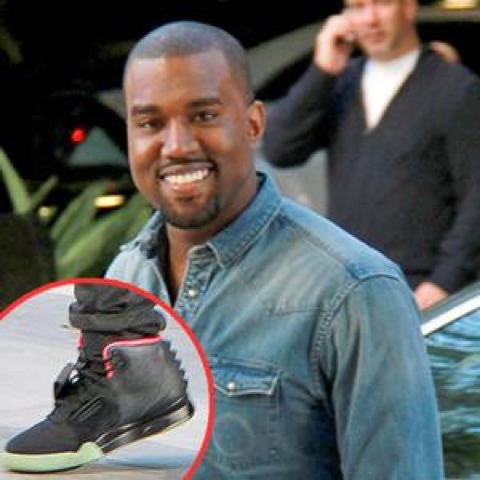 Last season (Spring 2012) during Paris Fashion Week, Kanye West showcased his first collection to an audienec filled with high profile industry folk like Azzedine Alaïa, Dean and Dan Caten of DSquard, Olivier Theyskens, Jeremy Scott, and the Olsens twins, he even had the pleasure of Silvia Venturini Fendi and her daughter Delfina Delettrez Fendi going backstage to congratulate him after the show.
Despite a crowd filled with celebrities and industry greats, Kanye’s show wasn’t well received and he received a number of poor reviews stating the ‘line lacked cohesion and some pieces appeared ill-fitting’
A man with great passion, energy, pride and dedication, I’m not surprised Kanyes returning.
View the previous collection HERE
I’m sure I read somewhere a couple of weeks back that he’s planning to move to London to set up a studio and dedicate more time to his fashion career while also be close enough to stop by his lecturers and fellow students at Central Saint Martins for on hand advise….